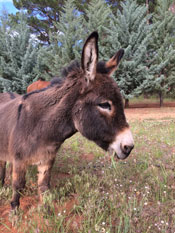 Our “spokesequine” is Eyore, a miniature donkey extraordinaire. Yes, we know that his famous namesake has two “e’s,” but this is the spelling designated by his previous family. We call him “E” for short. Eyore is a rescue twice removed. He came to us in August 2014 from a wonderful caretaker with whom he lived for many years, serving as a buddy to her two horses. Tragically, both horses passed within weeks of each other. The owner, faced with this devastating heartache, knew that Eyore would not do well on his own. She moved him to a local boarding facility so he would not be lonely and put him up for adoption. So how did Eyore come to us? I had spread the word that we were looking for a miniature donkey as a companion to a horse we have that has separation anxiety. A few weeks later we got a call about Eyore. We visited him at the boarding stables, and it was love at first sight. For such a little guy he has a huge presence. We reached out to his owner, explained who we were and the role we hoped this little donkey could play in our organization. She immediately agreed it would be the perfect home for him.

Eyore is one of our happier stories. His human mom took excellent care of him, going above and beyond to correct all the damage that was done by prior lack of proper nutrition and care.

As our mascot, Eyore will be sharing stories about life at the ranch from his point of view in Eyore’s Corner. 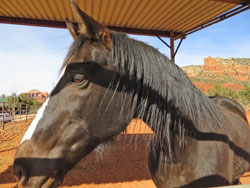 And he is! A registered Tennessee Walker, Lucky, in a roundabout way, came with the property. His story is typical: His very busy owner dreamed of having a horse. During our initial property tour, we were told that Lucky was a boarder and that his owner had not been out to see him for nearly 2 years. When the owner was contacted about the potential sale of the property, it was made clear to us that the horse was no longer wanted. The vet and farrier were called for evaluations, and we contacted a trainer. It was obvious that Lucky had not received the attention and care he needed, probably due to miscommunication between his owner and caregivers. We are not here to point fingers, though. Let’s just say that Lucky is basking in the love and attention he now receives on a daily basis.

Check out more photos of Lucky in our Photo Gallery. 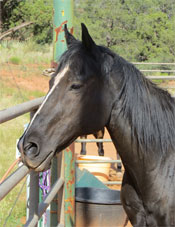 A handsome, black, 16.2-hands-high Thoroughbred. Mac was just hours away from being picked up by a slaughter buyer. Advertised as a “free horse” on Craigslist, his listing was quickly shared on Facebook by local animal activists. And this is where fate comes into the story. Mac was one of several lesson horses at an area boarding school. A favorite among the teachers, Mac had a list of people waiting to give him a home after he retired. One of those on the list was Mac’s future rescuer. Unfortunately, Mac went to someone else. Devastated, she searched for him for nearly two years. She had given up all hope of finding him until she saw his shared Craigslist ad on Facebook. We won’t disclose the details, but she was able to convince the owner that Mac’s life was more valuable than the few hundred dollars they would get from the kill buyer. She hurriedly put him in the trailer and drove off before they changed their minds. At the ripe age of 24, Mac proved to be a hard keeper and required more special care than his rescuer could manage. This is where we came into the picture. After receiving a forwarded email sharing Mac’s story and the heartfelt request to help find him a forever home – and even though we had just moved onto the property and were not fully ready to take in a new rescue – we could not turn our backs on this boy. He arrived with a 3 body score and hooves and teeth that required attention. Although he is basically retired, Mac still has a lot of energy and is happy to occasionally be called to duty as a lesson horse.

Check out more photos of Mac in our Photo Gallery. 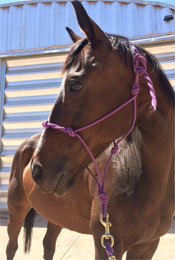 In our hearts forever – India passed on 10/22/2015 from colic complications. She now runs free in the green pastures over Rainbow Bridge.

Meet the most special, sweetest mare. If she could talk, she would have quite the story. Here is what we do know about India, a registered Thoroughbred. This beautiful bay mare came to use from a local family who could no longer afford to feed her. From her tattoo we learned that India is a great granddaughter to British Triple Crown winner Nijinsky. With 4 starts she was non-placed. We have very little information on her life and how she ended up in northern Arizona, although we did learn that she was once pregnant with twins and that both of her foals died – one was still born and the other died shortly thereafter. Our vet evaluation revealed severe injuries to her back and pelvis, possibly from an old track accident. She has adapted well and our vet feels that at this time India is not experiencing any discomfort from her deformity. As we have gotten to know her, we can confirm that she is good natured, trusting and resilient.

Check out more photos of India in our Photo Gallery. 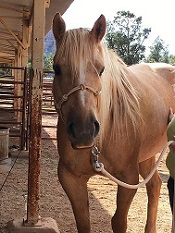 We gave her a name that “Game of Thrones” fans will recognize as belonging to the fair haired Dothraki queen. It just suited this gorgeous Palomino much more than the name she came to us with. Khaleesi was born and raised on a large cattle ranch in Southern Arizona near the New Mexico border. AQHA registered, she was destined to become one of their prized broodmares, until she suffered a severe tie-up during a cattle drive. Vet care in this remote area is a luxury, so barely able to move, she was put in a corral with some weanlings and left to heal with doses of Bute and time. Since this was her second tie-up, some research was done and her breeding showed PSSM (Polysaccharide Storage Myopathy) a genetic muscle disorder that can be managed but not cured. This ended her career as a ranch horse. Breeding was also out of the question as her foals would carry the gene. Life on a rural cattle ranch is hard and who knows what would have happened to this beauty if a kind soul had not reached out to a rescue in the AZ network. We read up on PSSM and felt that it was a challenge we were willing to take on. On April 3, 2016, Khalessi made her journey north to Sedona. She was in worse shape than we could have imagined. Every step was a struggle. Her pain caused her to show aggressive behavior when we would touch her. Even a gentle brushing would bring on pinned ears and grinding teeth. In time she began to heal and trust. She will never be 100%, but we are figuring it out and she has improved greatly over the months she has been here. Even some of her vets are amazed. Because of her condition and the extreme care that needs to go into her diet and the amount of exercise she can handle, Khaleesi will live here as one of our Sanctuary horses. And at only 5 years of age we plan on having her around for a long time.

Check out more photos of Khaleesi in our Photo Gallery.